Summer in Florida is definitely a time to take it easy.  There are a few shows here and there, likely to be no coursing and most of us just stay close to home and the air conditioner or go to the beach.

Not this summer.  Our members have been BUSY.  New champions, a Ridgeback only ASFA run on an early July morning and spending time playing or lounging. 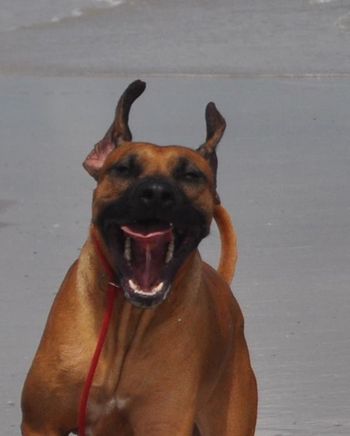 Cooper headed to the beach 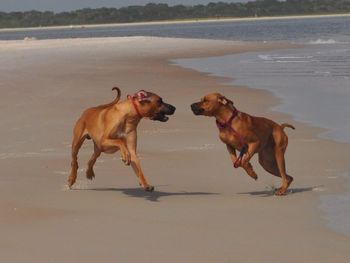 Cooper and Diva enjoyed the beach 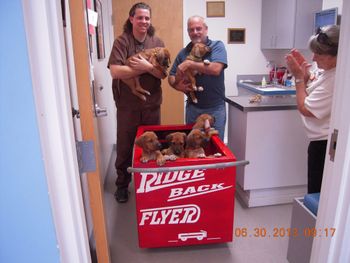 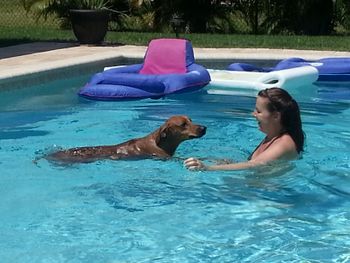 Pepper swam the summer away 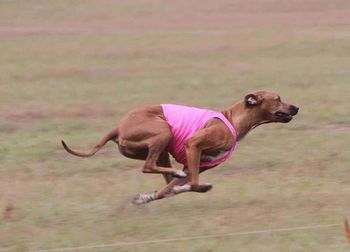 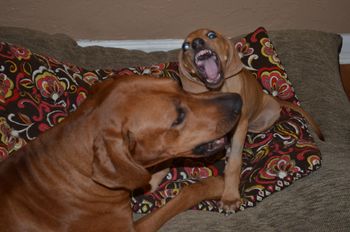 Bindi and Meera got to know one another 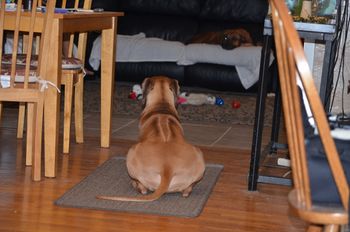 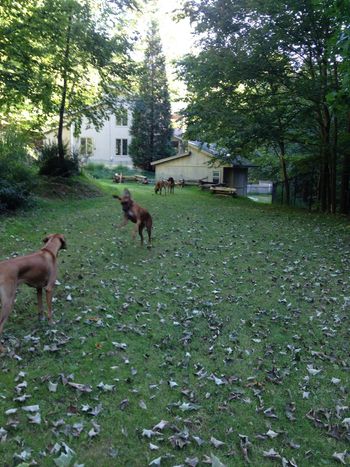 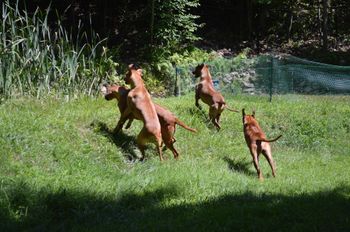 They also discovered they have a pond!!!

Roccridge Spice of Life - "Sara" won big at the June Orlando shows.  It was Sara's first points and it was a major.!  Sara is owned and loved by Mark and Kathy Stewart and handled by Christina Choffey

Another BIG winner in the ring is Cooper - Kengali's Unbridled Power.   Cooper went WD for back to back 4 pt majors making this his 3rd 4 pt major in Richmond VA on June 28, 29.  He won all days shown in Kenner LA, he went WD in Kenner LA on Aug 1 and Aug 3 where he became a NEW CHAMPION.  Then on Aug 4 his first time in the Breed ring as a Champion he went Best of Breed (BOB) with a 5 pt Major GrCH pts   Here is Cooper in Virginia with his handler, Arvind.

CROSSWICKS DISCO BABY DON'T BE TARDY FOR MY PARTY
Disco earned her first 5pt. Major during her second Weekend of showing.
Disco was shown by Marcelo Veras, winning 1/ W.
Then we handed Disco over to Carol Smith who took the 5pt.major, BW, for Disco! :)
Thank you Marcelo and CAROL SMITH!!! ~Kimi Murphy

CROSSWICKS DISCO BABY DON'T BE TARDY FOR MY PARTY
Disco earned her second Major, a 3pt. mjr., at her third weekend of showing.
This show was a Sunshine State RR Club Supported Show.
Thank you handler Ron Bigford, and, Ginny Merchant of the SSRRC for a beautiful Ribbon & Stained Glass Trophy.
~Kimi Murphy

Zora Zora Zora.  She went on a Southeast tour and came up with some grand wins!


And then it was on to Atlanta!!

Announcing new champion, CH. Kengali's Unbridled Power  - Cooper!  Cooper is owned and loved by SSRRC member, Lisa McElroy.  You can read all about his brags in the Ring News section!

This past June, at 18 months, Bohdi received his final Major and is now a CH. :) He finished at the Orlando Shows under Judge Dr. Carol White-Moser. Bohdi is Handled by Ron Bigford and I can't thank him enough.Orlando, June 2013. It was a crazy day, but Bohdi was his happy go-lucky self ..as usual. It was a fun long year for us. I'd like to thank all my new RR friends for their support and encouragement. Some may not think about it but a kind smile has a way of reassuring you everything is going to be Ok. I'm delighted to be part of the Florida RR community as I received many smiles this past year. Many thanks to a lot of people for being part of this experience. ~kimi murphy

And yet another new Champion! 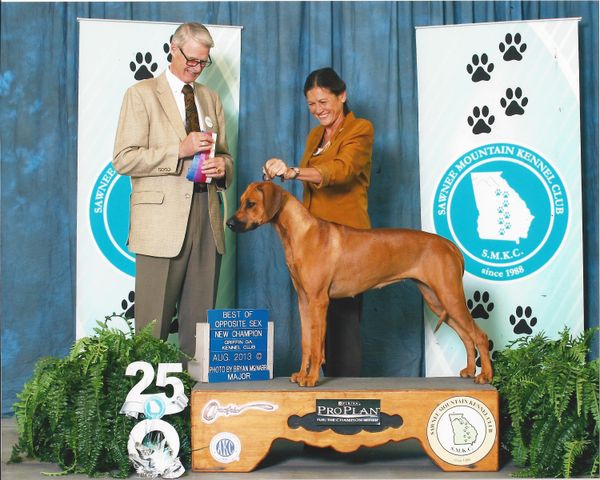 A case of Parvo

Meera arrived home on July 25, 2013, coming all the way from Chilliwack, British Columbia.  Meera was a happy, healthy 10 week old puppy.  She had her first vaccinations on July 13, 2013.  She was set to have her 2nd set of shots in 2 short weeks.
Here is Meera when she was at home before the disease

That was before disaster struck.

On Saturday, July 27, 2013, very early in the morning, Meera's breeder alerted us to the fact that her brother had come down with parvo. Parvo.  AKA the Puppy killer.  It frightened Matt and I very much and we began to watch her for any signs and symptoms. The very first symptoms started Monday night at 8:00 pm.  Meera vomited several times and it was decided to make a trip to the Deland Animal Hospital.  This 1:30 am trip saved her life.  Meera was admitted to the hospital where she stayed for 8 days.  She went from a playful, happy puppy to a pup that could not even sit up and greet her owners who came to visit her every single day.

On Saturday, August 3, 2013, the news was grim.  Her labs were bottoming out and she was just not getting any better. She had not eaten for 5 days and it did not look good for the little puppy. Normally, after 5 days, a pup starts to make progress.  Meera was not making any progress.  To say that we were devastated is an understatement.

On Sunday, we nearly transfered her up to the University of Florida; however, the angels smiled upon little Meera and decided that she was going to recover.  By Sunday afternoon, her labs had turned around and the vets at the hospital felt that she would make a recovery.

What a difference it was to see her on Monday - one week after she went in.  She was up, alert and whining to be held.  Meera came home the next day.  Her weight was down to 8 pounds - she had lost half of her body weight.

Please remember, parvo can travel home with you from dog show.  Take precautions when you arrive home - or better yet, don't go to the show if you have puppies in the house or a new puppy that is not completely vaccinated.

Parvo is considered "ubiquitous" - meaning that no environment is free of the virus unless that environment is regularly disinfected.  Parvo can also live in the environment for up to a year and puppies that have survived the disease are still shedding the virus for 3-4 weeks.  You must take precautions and clean up all stool and spray the area with a bleach solution.

And make sure you vaccinate.  All puppies need to have their vaccinations - 3 sets and then their rabies shots.  Shots should be given by a qualified vet or a breeder that knows where her stock is coming from.  Do not rely on those cheapie vaccines you can get at Tractor Supply.  Those expired shots have left many people heartbroken.  Also remember to get our adult dogs vaccinated as well.

We do believe that what saved Meera's life was taking her in immediately and getting her care at the hospital.  While expensive, this very well saved her life.  We also had the fortune of knowing that her littermate brother had Parvo, so we were already looking for the signs and symptoms.  Many people think that they can treat this at home and have tried, only to have a devestating result.   We knew that we did not have the skills, or the know-how to treat this very sick puppy at our house and that the best place for her was at the vet getting 24 hour care.

Meera after the ravages of Parvo

I have attached links for you all to read and get educated about this deadly virus.

Meera is home now and gaining weight and has returned to the happy, playful puppy that she was meant to be.  We have added her name to the Canine blood donor site for her to give blood when she is a little older.  She is a CPV survivor and we can hope that her blood can save another pup's life.

I hope no one ever has to go through what we went through.  If you have a young pup at home, stay away from the dog parks, the dogs shows, pet stores, and any other place where they could possibly pick up any disease.  Your puppy is not fully vaccinated until 2 weeks after their last shot - usually 4 or 5 months of age.  I know it can be a pain to stay at home with a rowdy pup, but it could very well save the life of your puppy.

Here is Meera today.  What a difference.

Educate yourself on Parvo.  Here are some common facts and myths:

1.  Parvo does not limit itself to puppies.  Adult dogs that have not had all of their puppy shots as pups can still get this disease and it can kill them.

2.  Puppies shed the virus for 2-3 weeks AFTER exposure to the disease and start shedding the virus in their stool within 5 days of exposure..

3.  The incubation period is anywhere from 5-14 days after the pup is exposed.  Early VETERINARIAN treatment is encouraged for the best outcome.

4.  There is a lot of misinformation out there as to how long the virus remain alive in the environment.  The most consistent, and one supported by most vets, is that it can live up to a month in your home but up to 5-7 months in your yard.

5.  Bleach - a 1 part to 30 parts water - is the best way to kill the virus.  And you must allow the bleach to sit for 10 minutes before rinsing.  Use this to clean toys, your grass and mop all of your floors and wipe down other objects in your house. Bedding (human and animal) needs to be washed with bleach as well.